A Stroll in Paris

No, we aren't going to get on a plane and go to Paris, although I would like to see it some day. I am working on a block of the month designed by Gudrun Erla, of GE Quilt Designs, called A Stroll in Paris. I learned of Gudrun from Facebook, and joined her group, called Gudrun's Quilt Crew. She is originally from Iceland, and now lives in Minnesota. Some of her quilt designs, notably her book Quilts of Iceland introduced me to her quilting methods. Gudrun has developed a method and set of rulers called Stripology that focuses on using precuts, and of easy ways to make your own precuts. Do take a look at her website for her rulers and patterns. She also has regular video chats on Facebook that are fun and educational.

Gudrun hosts quilting trips sometimes, and a group went to Paris last year. Walking around and visiting sites in Paris has inspired her to create a 9 month block of the month program. Block 3 is just out, so it's not too late to join in. By the way, she is doing a quilting cruise next year, to the Carribean!

My sister and I are going on a cruise this fall with the same organization, Quilt and Cruise, that is sponsoring Gudrun's Carribean trip next year. We're doing the Colors of the Coast Cruise visiting New England and Canadian Maritimes with multiple port calls, and quilting classes on days we're at sea! I'm not familiar with the instructor but her patterns look interesting and we get a kit for each of the 3 classes. Sounds like a great way to spend the days away from land. I get sea sick in a small boat but everyone promises I'll be ok on the big cruise ship. I sure hope so. 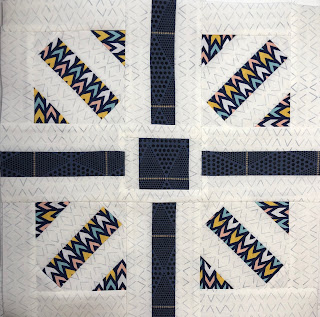 Anyway, back to Paris. The blocks are all inspired by something Gudrun saw in Paris, an architectural detail, a tile, you name it. I've made blocks 1 and 2 and have a story to tell. I enjoy a block of the month but this one was a little scary because the design is a mystery. I like what Gudrun does so decided to try it. Blocks release on the 6th of the month and started in May. I jumped right in and made my Block 1, shown here.
Next, block 2 came out in June. It is a bit different from block 1 and I was having a hard time choosing fabric. I am working from a couple bins of fat quarters, that all basically get along, but some play better with others. 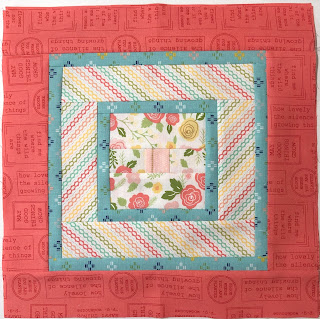 Here is what I came up with. When I posted it in the Facebook group, everyone felt it was pretty, but that it didn't go with my block 1. I agreed but just had a terrible time trying to pick fabric that went better with my block 1. 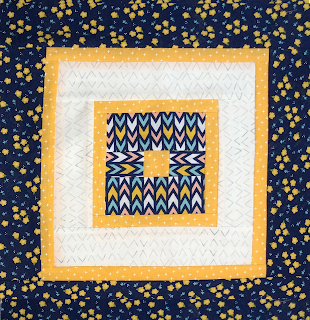 After watching what everyone else made for a bit, I decided to try again. I think I did better this time. I don't know why I had such a hard time with it. Oh well, done. 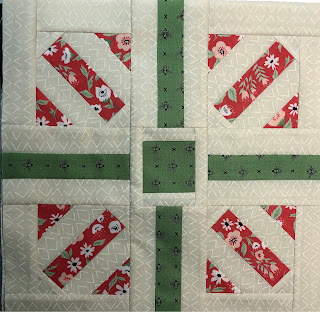 Well, not quite done. Now I have a block 2 without a matching block 1. So back to my fabric bins and I found good choices.

Except that I guess I'm making two quilts!

Here are the two sets: 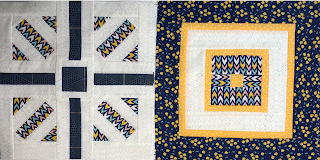 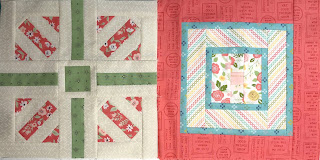 Did you notice I'm using the same background fabric in both sets, just one white and one cream. It's called Day in Paris, by Zen Chic. Perfect choice, I thought.

Thanks for visiting, and I hope you enjoy what I'm sharing!

Posted by Seacoast Quilter at 12:56 AM

Seacoast Quilter
Bethlehem, CT, United States
I’ve been working with fabric since I was a child. I’ve made clothes, penny rugs, lots of bags and even more quilts. I started to quilt seriously in 2000 and clothing construction has dropped to almost zero. I owned a quilt shop for seven years and my background is computer programming. I am now teaching and designing quilts. I love to sew and hope to share interesting related items. 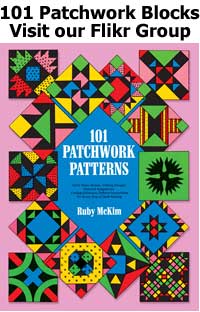